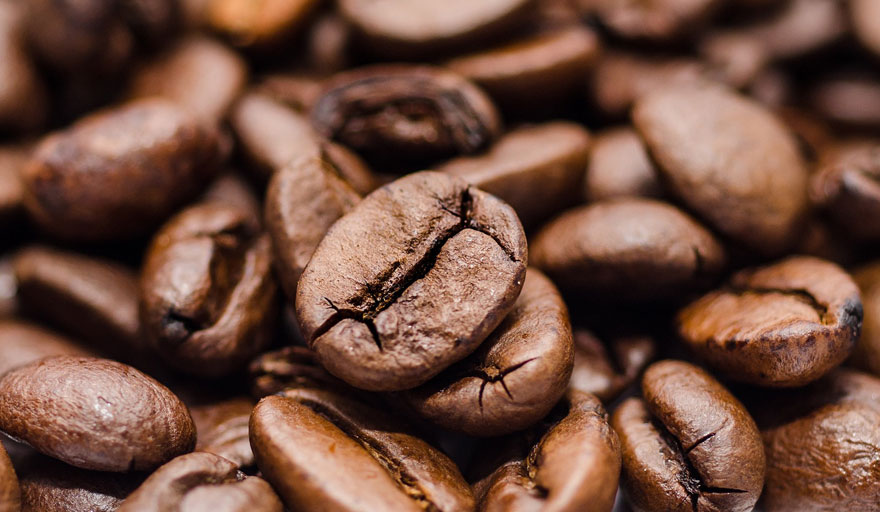 The classic among the coffee types: Arabica coffee. The distribution area of Arabica coffee is in Ethiopia. Arabica (Coffea arabica) is very sensitive to heat and grows under the protection of tall trees at an altitude between 1,300 m to 1,800 m above sea level – hence the name “highland coffee”. It is approx. 8 meters high, is evergreen and requires a high amount of precipitation of 2000 mm p.a. The maturation process takes 6 to 8 months. Arabica coffee accounts for 61% of world coffee production. Wet processing after harvesting is typical for Arabica beans. This allows the bean to taste even better. In Brazil, Colombia, Guatemala, Mexico and the rest of Central America, mainly Arabica beans are grown. Although the Arabica contains only 1-2% caffeine and therefore half as much caffeine as the Robusta coffee, it is therefore considered to be of particularly high quality with a pronounced, fine aroma.

Robusta coffee (Coffea canephora) was discovered in Zaire (then Belgian Congo) in 1898. Approx. 36% of global coffee production is Robusta coffee. Robusta was originally the brand name of a Belgian horticultural company. The name Robusta stands for the robust taste and aroma of this type of coffee and the robust nature from which it comes. It is less sensitive to parasites, heat and disease and is therefore more popular with coffee farmers than Arabica. The maturation period is around 9-11 months. This variety is grown at a temperature of 24-30 ° C at much lower altitudes than Arabica, at an altitude of up to 800 meters, which is why it is also known as “lowland coffee”. Typical growing areas are Uganda (where the Robusta variety was also first discovered in Uganda’s lower, tropical regions), Cameroon, Ivory Coast, Gabon, Angola, Madagascar, Zaire, all of Southeast Asia with Indonesia and Vietnam. Sometimes even in Brazil. Robusta coffee contains 4 times as much caffeine as Arabica coffee.

The Excelsa coffee bean was first discovered in 1904 on Lake Chad in West Africa. Because of the poor soil qualities there, it is considered a rare type of coffee, very expensive and therefore little use in the coffee industry (approx. 1% of world production). Excelsa beans are similar to the Robusta bean. It is particularly aromatic . The Excelsa plant has a fast and vigorous growth and the plant itself is one of the largest in the world. The maturation process takes 12 to 14 months. It is very robust because it has to get along with barren and dry soil conditions. It is mainly grown in the Chad region and is one of the main sources of income for the country. Other growing areas are Liberia, Sierra Leone, Central African Republic, Benin, Philippines, Indonesia, Vietnam.

The country of origin of the Stenophylla coffee is West Africa. This type of coffee was first discovered in 1890. It is a small-leaved plant and can grow up and be cultivated to 700 m above sea level. It reaches a height of 3 m. The famous “Highland Coffee” is made in Sierra Leone. Due to its extremely long ripening time – the plant needs 9 years to generate the full yield – other coffee varieties were preferred. The Arabica takes a maximum of 7 years. The beans are large and round and turn black as they ripen. The leaves of the shrub are very narrow and much smaller than the other varieties. The taste is very mild and is often compared to tea.

First discovered in 1876 in Brazil, Maragogype coffee is a real rarity because it is only available in small quantities is grown. The bean itself is very large, which earned it the name “elephant bean”. It is the largest coffee bean in the world. The plant is 30-40% larger than normal Arabica varieties and grows at an altitude between 1200 and 1500 meters above sea level, mainly in South America. When unroasted, it is elongated and large and contains little caffeine. Nevertheless, the harvest yield is lower than with other types of coffee.

Kopi Luwak – The “Rolls-Royce” among the types of coffee

The country of origin of the “most expensive coffee in the world” is Indonesia. On the islands of Sumatra, Java and Sulawesi, small marsupials live which the inhabitants call Luwak.

These civets were considered by the locals for a long time as vermin because they are the the ripe coffee cherries. After consumption, the beans are digested and – completely unaffected by the digestive process – excreted. They still have the indigestible pigment skin. During the digestive process, the coffee beans are subjected to wet fermentation and are exposed to enzymes, which affects the taste of the beans. As a result, the beans largely lose their bitterness and take on a chocolatey, full aroma. Locals collect the coffee beans that are excreted undigested. Then the outer skin is peeled off and the beans are washed and roasted. In total, only around 200-250 kg of Kopi Luwak coffee are collected each year, which makes it the most expensive coffee in the world. In Indonesia, too, real Kopi Luwak coffee is hard to come by. In America and Europe it is very rare and very expensive. Much of what is offered as Kopi Luwak coffee is often a fake.

“Cà phê sua dá” is a coffee blend that is only offered in Vietnam. This mixture contains equal parts Robusta, Arabica and also Chari and Catimor beans. This coffee is very dark in color and has a chocolate-nutty taste. Sometimes this mixture also contains Excelsa or Liberica coffee beans. Due to the taste of the Vietnamese, however, the coffee drunk in Vietnam does not contain the two types of Excelsa and Liberica coffee beans, these are only added for import. Due to its particularly low caffeine content, the coffee is often also sold as a mild coffee. Decaffeination is no longer necessary.